The Problem with Poop
We all know that pet waste left unattended is just plain gross.  But did you know that unscooped poop causes huge problems for waterways like rivers, lakes, and streams?  The EPA classifies dog waste as non-point source pollution, along with herbicides and insecticides, oil, grease, and toxic chemicals.  Not only is pet waste unsightly and smelly, but it contains an abundance of bacteria, parasites, worms, and more that wash into local waterways and pollute our natural resources.  Pet waste can also make people, pets, and wildlife very sick by acting as a vector for disease transmission.  It even attracts unwanted attention from pests.

E. coli and Other Dangers
One of the biggest risks associated with pet waste is E. coli bacteria.  Dog poop can contain 23 million E. coli bacteria per gram of waste, and the average pile contains nearly 3 billion E. coli bacteria!  Pet waste also hosts giardia, salmonella, parvo, worms, viruses, parasites, and more.  These can cause fever, vomiting, diarrhea, dehydration, and other unpleasant symptoms.  Even after solids are washed away, these unwanted guests can stick around on the ground for years!

Waste in the Water
If left unattended, pet waste and the associated contaminants are picked up by stormwater when it rains.  Stormwater (and the pollutants it picks up along the way) is washed down storm drains, where it travels untreated and unfiltered into Greenville’s waterways.  In areas that lack storm drains, stormwater flows directly to nearby waterways.

These harmful entities aren’t the only trouble pet waste brings to waterways.  Pet waste that decomposes in water is a quadruple threat.  Decomposing waste releases excess nutrients into the water, which cause algal blooms (eutrophication).  Algae blooms can be toxic to humans, pets, and wildlife as well as make recreation, such as boating, swimming, or fishing, dangerous for humans.  Algae can also be harmful because it feeds on and depletes oxygen in the water, meaning there is less oxygen available for the aquatic species that depend on it.  Oxygen is also consumed during the decomposition of pet waste, thus removing even more oxygen from the water.  Decomposing waste also releases ammonia, which damages the health of the aquatic system.

What to do About Doggy Doo

Still have questions? Click below for common misconceptions and frequently asked questions.

You may find yourself wondering…

Isn’t it bad to put plastic bags full of poop in the landfill? Landfills are lined to prevent contaminants from leaching out into soil and groundwater.  Plastic grocery bags make great pet waste bags, and it enables the bags to be repurposed.  Biodegradable pet waste bags are also available for purchase.

Why do I need to pick it up if it’s in my own yard or the woods behind my house? Even if you don’t live near a body of water, E. coli bacteria and other contaminants are still picked up by rain water and carried into local waterways.  Everybody lives in a watershed, and every watershed drains into local waterways before eventually traveling to the ocean.

Isn’t dog poop a natural fertilizer? No!  A dog’s diet and gut composition are much different than those of manure producing animals, such as cows and chickens.  The high levels of bacteria, parasites, worms, and other pests are unsafe to be used as fertilizer.  Dog poop is also highly acidic, which means using dog poop as fertilizer will produce the exact opposite results than you had intended for your yard. 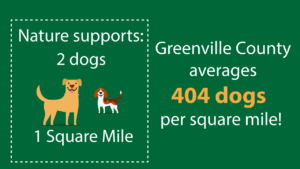 What about wild animals? Dog poop contains 23 million bacteria per gram, which is far more than wild animals.  The natural environment hasevolved to handle wildlife that is naturally found in those areas but can only naturally support about 2 dogs per square mile.  In Greenville County, there are more than 400 dogs per square mile.  The accumulation of waste of all these dogs overloads and strains the natural system.

Can I compost pet waste? Yes!  Special pet waste digesters and composters are available.  Pet waste should never be added to a regular compost pile.  Pet waste must steadily reach temperatures of 165 degrees or more to kill any unwanted residents and eliminate the risk of making humans and animals sick.  Traditional compost piles do not generally reach these temperatures.

There are lots of dogs in Greenville County… 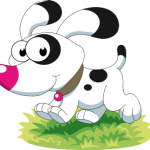 According to the American Pet Products Association…

There Is No Poop Fairy

The There Is No Poop Fairy campaign began in 2011 in an effort to encourage dog owners to clean up after their pets.  The campaign focuses on the proper disposal of pet waste, reminding people to Grab It, Bag It, Toss It.  Pet waste is one of the leading sources of E. coli pollution in the Reedy River and is a critical public health issue.

Kids and adults are invited to play as the Poop Fairy in a round of the Poopstacle Course, an exciting relay race that puts opponents head-to-head in a competition to see who can collect the most dog poop (don’t worry, it’s only plastic).  If you’re lucky enough, you may get a glimpse of the “Not a Poop Fairy” hanging out around Greenville County (think 27 yards of pink glitter tulle).

History
“There’s no such thing as the poop fairy” was the brainchild of retired Virginian-Pilot columnist Larry Maddry sometime around 2002.  Jasper, an amiable, long departed male Labrador retriever, was the dog star in several aspects of a scoop the poop campaign that began at that time.

The campaign was an effort by the Virginia Beach SPCA, Lynnhaven River Now, the city of Virginia Beach, and the Hampton Roads District Planning Commission. Jasper’s owner, John Koehler owner of Koehler Books, was the creative designer behind the campaign in which Jasper was not only the poop fairy but was also the dog in a life ring eyeing a croaker leaping overhead and urging everyone to “Scoop the Poop and Save the Rivers.”

The more recent Poop Fairy campaign originated in 2011 in Jefferson County, Colorado.  Boise, Idaho rolled out their version of the campaign with a new “fairy” in 2012. Greenville County revamped the character into a humorous fairy in 2011.

The Poop Fairy on the Move!
The GCSWCD Poop Fairy campaign has made it’s way to over 30 US and international municipalities!

For information regarding Poop Fairy licensing for your organization, please contact Lynn Pilewski at 864-920-6397 or lpilewski@greenvillecounty.org.

Yard Signs
Do you face the challenge of a not-so-polite neighbor? Post a friendly reminder in your yard with a “There Is No Poop Fairy” yard sign, available for free to Greenville County residents!

Informational 4"x9" cards are available to hand out in your community. Just give us a call at 864-920-6397 for more information.