Stormwater is, in essence, just what is sounds like: water from a storm.  Any precipitation that falls from the sky, including rain, hail, and snow, is considered stormwater.

In general, there are two fates for falling stormwater.  In a natural landscape without development, stormwater is absorbed into the ground or falls into bodies of water.  This gives needed water to plants and animals and replenishes reserves of surface and groundwater.  In contrast, in an urban landscape, stormwater falls onto impervious surfaces (surfaces that do not absorb water) such as roads, sidewalks, rooftops, or parking lots and is not soaked up by the ground.  As a result, the falling water is swept across these surfaces as runoff.

Image courtesy of Carolina Clear, a service of Clemson Extension

Stormwater runoff plays a large role in local water pollution.  As the runoff flows across the ground, it picks up pollutants and carries them into local waterways, such as rivers, lakes, and streams, before eventually making its way into the ocean.  In a natural system, a variety of plants act as filters that clean pollution from the water as it percolates into the ground.  Without these natural filters, pollutants and other debris accumulate and are washed into bodies of water.

In addition to transporting pollutants, runoff can also cause erosion and sedimentation by sweeping away and displacing soil.  It can also cause localized flooding when storm drains take on too much water at once. 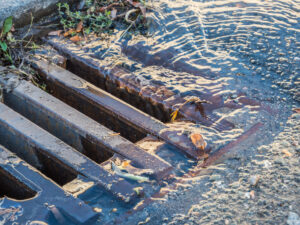 Here in Greenville County, storm drains lead directly unfiltered and untreated into local waterways, such as the Reedy River.  This means anything that makes its way down a storm drain, including stormwater, pollution, sediment, debris, etc. will end up in the water.

Between 2000 and 2013, Greenville has seen an average annual population increase of 1.9%, which exceeds the South Carolina state average.  As development needs are met, the amount of impervious surfaces increases, creating more runoff.  GCSWCD focuses on five major pollutants that affect Greenville County:

By focusing on pollutants that are swept up by stormwater, we help to reduce our impact by keeping these harmful substances out of the path of runoff and out of our waters.